Jess Godwin was my first friend in Chicago. We were at Musical Theater orientation at Columbia College, both transfer students, checking out our  fellow students. We looked at each other, acknowledged each other’s talent, and decided right then and there that we would be friends. I had just gotten out of the Navy, JUST got to Chicago, and I had no friends. It was my birthday. As a girl who has moved around her whole life I’m used to starting a school year in a new town, in a new school, and not having made any friends yet to celebrate my birthday with. Well, Jess and Nicki Peterson-Pearce, another wonderful orientation friend who is crazy talented that I am still friends with today, took me to have my first slice of Chicago pizza. I barely knew them, but they did that for me. That early kindness has not been forgotten.

We kept in touch during school and became friends. I watched her instantly skyrocket to the leads in the mainstage musicals at school. Her voice was unreal, one of the best live voices I’d ever heard. She gave me the number to her voice coach, John Komasa, who is a genius. I started training with him. I then started training with her acting coach, Janet Louer, my mentor to this day. Jess and I took many audition classes and Laban classes together and kept bonding. While she excelled at it, I could tell early on that her passion wasn’t for the theater and saw her struggle with that. She would grab me in the hall and we’d duck into a classroom where she’d quickly play me the new song she was working on. Her face would light up and it was clear that this is what she was meant to do.

Jess graduated college a year earlier than I left, and again, instantly had musical leads all over town. She got incredible reviews, and was definitely gearing up to be the new “it girl.” We even, FINALLY, got to do a show together, Songs for a New World, at Bohemian Theatre Ensemble. We had a wonderful time and it is still one of my favorite shows I’ve ever done.

Jess started devoting her life, full-time, to being a singer-songwriter a year or so after we did that show. I remember her early shows and how powerful Jess’ original music was. I was moved every time I saw her perform by the unbridled passion that she channeled into her performances behind that piano.

People couldn’t help but take notice, and I have watched for the last couple of years as Jess was pulled into a million directions. She had music business people telling her what to wear, what kind of music to sing, to stay behind the piano, to not play and just sing, to be jazzy, to be poppy, to use patter, to not patter, to dance, to not dance,  to be the girl next door, to be a sexpot, etc. etc. etc. People were obsessed with how they could sell Jess the best so that THEY could make the most money off of her.

Recently, Jess has decided to do things her own way. Not only is she not listening to anyone’s “advice” anymore, but she is using her music to empower young girls. She started the Greater Than project which targets bullying, body image, and other issues specifically targeted to young girls. She truly believes that music can heal and can save people. This became apparent at her concert Saturday night, when she brought up a girl from the audience. Her name was Paula. Paula was one of Jess’ fans on twitter and Jess noticed that Paula wasn’t doing so well in school and that she wasn’t having a very easy time with peers. Soon after, Paula started learning to play the guitar. Her tweets quickly turned from how miserable she was to how excited she was to be a burgeoning musician. And Saturday night I watched Jess sing “Blackbird” while Paula accompanied her. At the end, not only did the place erupt with applause, but we started chanting, “Paula! Paula! Paula!” My eyes filled with tears. It hit me hard, that Jess was changing this young girl’s life. She would never be the same.

Jess has found her true calling. We all knew that her music would take her far and that her talent was incomparable. What we didn’t know was that she is a philanthropist and is the happiest when she is helping others. I am so damn proud of the woman she’s become. I am so moved by her efforts and she more than ever deserves a spot on my heroines list.

If you would like to support Jess you can purchase her music HERE.

So, I wasn’t planning on it, but I ended up watching the Tonys the other night. I’m glad I did. I think it was the best Tonys in years. I don’t always love the Tonys, or quite frankly what Broadway musicals have become. It’s so commercial and so shiny. A lot of times I feel like the individuality of a performer is stamped out in some effort to appeal to the masses. The young leading ladies of Broadway musicals are so similar nowadays in appearance and vocal quality that many times I can’t tell them apart. There are exceptions of course, but for the most part I miss the individuality and comet-like stage presence, and ACTING CHOPS, of women like Bernadette Peters and Patti Lupone. So I was so relieved that one of the first things I saw when I tuned in was Caroline O’connor KILLING a tap number in A Christmas Story. So fierce.

Who? I realize she’s not a household name to non-theatrical folk or even to some theatrical folk, but she is one of my heroes. Maybe this will clue you in. She played Nini Legs in the Air in Moulin Rouge and danced this PHENOMENAL tango.

The first time I saw that, I lost my shit. It was the sexiest, most emotional, incredible dance I’d ever seen. Caroline not only wiped the floor with this tango, but she stole every scene she was in in the movie. She was so expressive. Her comic timing was impeccable. I didn’t know who she was at the time, but she left a huge impression on me. I have also watched that clip hundreds and hundreds of times. It’s one of my favorite things in life. I find it incredibly inspiring and so passionate. 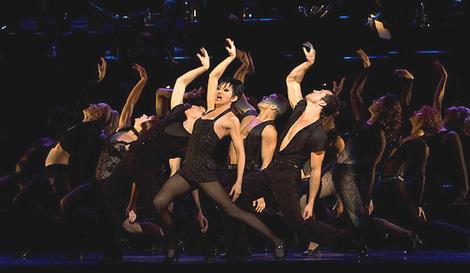 Flash forward a couple of years. It was the Summer I got out of the Navy. I was in NY auditioning for Juilliard. (Another story entirely). While I was there, my mother and I met up with a family friend that we knew from when we lived in NY and we went and saw Chicago on Broadway. As I was reading my program, I realized that the woman playing Velma was the tango dancer from Moulin Rouge! I was so excited and she did not disappoint. She was brilliant!

Flash forward another couple of years. I’m living in Chicago and working as an actress. I hear that Caroline is going to be in Follies at Chicago Shakespeare Theater with some of my friends incidentally! I knew I had to see her. I ended up going, and not only saw a terrific show, but had drinks with her afterward! She was a complete delight. We drank whiskey together and she told me with a twinkle in her eye to “never trust a New Zealander because they’re all inbred.” I don’t know if this is true, but it cracked me up. I love that she’s such a dame. Such a broad. We need more of those in musical theater. And she’s SUCH a triple threat. A TRUE one. When she writes Actor/Singer/Dancer at the top of her resume, she’s EARNED it. She’s also earned a spot on my heroines list.  I mean, just LOOK at this: